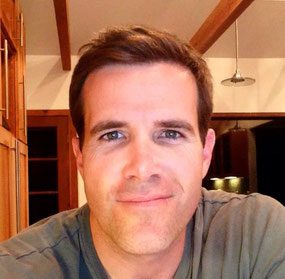 Daniel is president of Pangolin Design Group and co-creator of Kettle Gryp®. Originally from upstate New York, he’s been a small business owner in San Diego since 1998. He does occasional volunteering and fundraising for Make-A-Wish San Diego. When Dan is not working on Kettle Gryp®, you can find him traveling, flying paramotors, or at the gym. 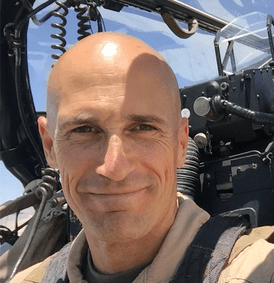 Andy’s (47) journey began in Pensacola, Florida on January 17, 1974 to parents Thomas Macdonald and Mary Patricia Russell. He graduated in 1992 from Ellenville High School, New York before attending Clemson University, South Carolina. There he served as the Captain of the Varsity Cheerleading Squad and graduated with a BA in Construction Science and Engineering. Upon graduation he had a higher calling…

On August 15, 1997, Andy was commissioned a 2ndLt in the United States Marine Corps. Designated a Naval Aviator in 2000, Major Thomas reported to Camp Pendleton, California for training in the AH-1W Cobra. Upon completion of training, he reported to Marine Corps Air Station New River where he joined the Gunrunners of HML/A-269. He deployed in support of Operation Iraqi Freedom in 2003, 2004, and 2005. Holding the title of squadron Weapons and Tactics Instructor, he was awarded the Navy and Marine Corps Commendation Medal (Valor), Air Medal – Individual Action, and Air Medal – Strike/Flight (15 awards). In 2018, after serving as a flight instructor, he retired from the Marine Corps Reserves. Andy will be remembered by the soldiers who knew him as a fearless attack pilot, a mentor to the Marines he served with and a dear friend to all.

Andy’s passion for flying, along with his entrepreneurial spirit, led him to continue supporting the war on terror, after military retirement, as a contract pilot flying challenging missions in Iraq and Afghanistan and piloting corporate helicopters. Always the engineer, Andy designed and built his current home and hangar, outside of Atlanta, in a fly-in development. There he served his community and volunteered countless hours assisting his neighbors, all of which he considered friends.

Self admittedly, he was never complete until he met the love of his life “Caroline” (Carolyn Walz). They married and welcomed their son and beautiful legacy, Rex, in 2020. Andy was a dedicated husband and a proud, loving father. He was now able to say he had it all. Unfortunately, his time to enjoy the incredible life he had built was too short, succumbing to a brief illness, on December 16, 2021.

Andy’s final act was a posthumous appearance, January 25, 2022, on the television show, Shark Tank. He and his business partner, Dan Sheppard, closed a deal with Lori Greiner to distribute their invention, Kettle Gryp. It was there that the Shark Tank’s national audience was introduced to his glorious, bald by choice “hair” style, infectious smile, humility about his military service and unmatched wit. All these attributes were displayed in daily life and familiar to anyone who had the privilege to know him.

Lightweight and compact, Kettle Gryp® travels easily in a carry-on or backpack so you can take your workout with you.

Kettle Gryp® transfers quickly from one weight to another and has been designed to fit most dumbbell handles. 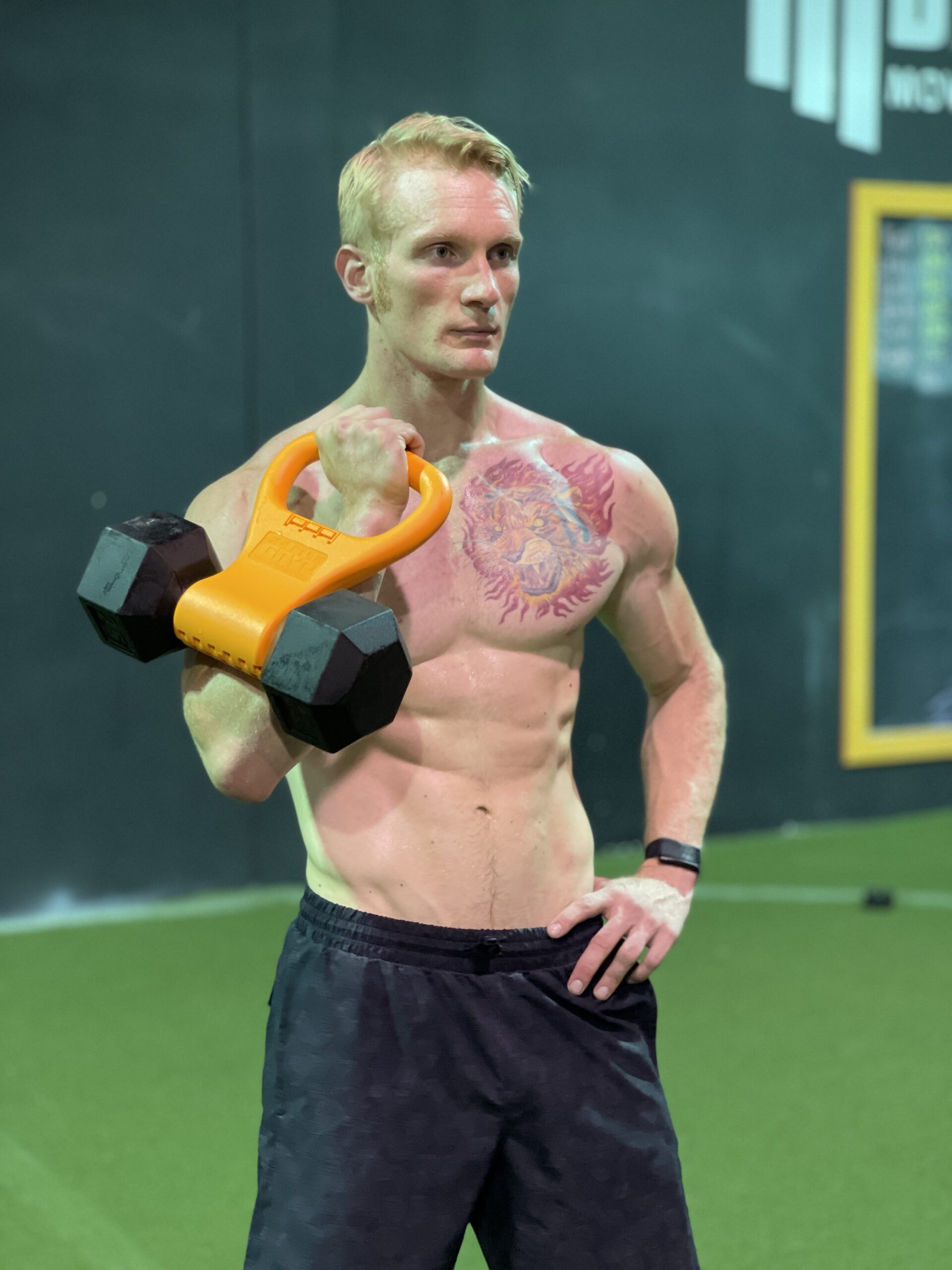 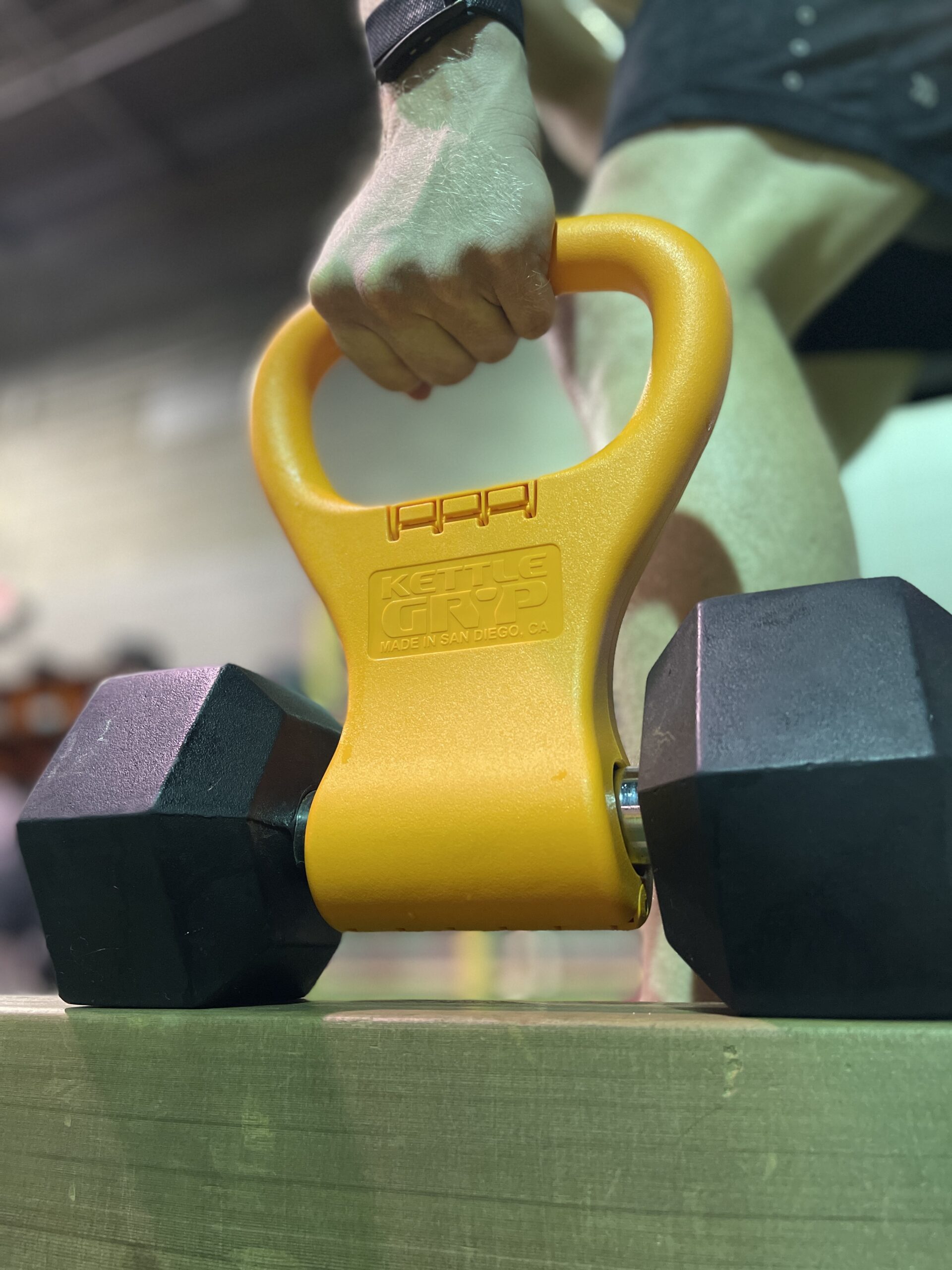 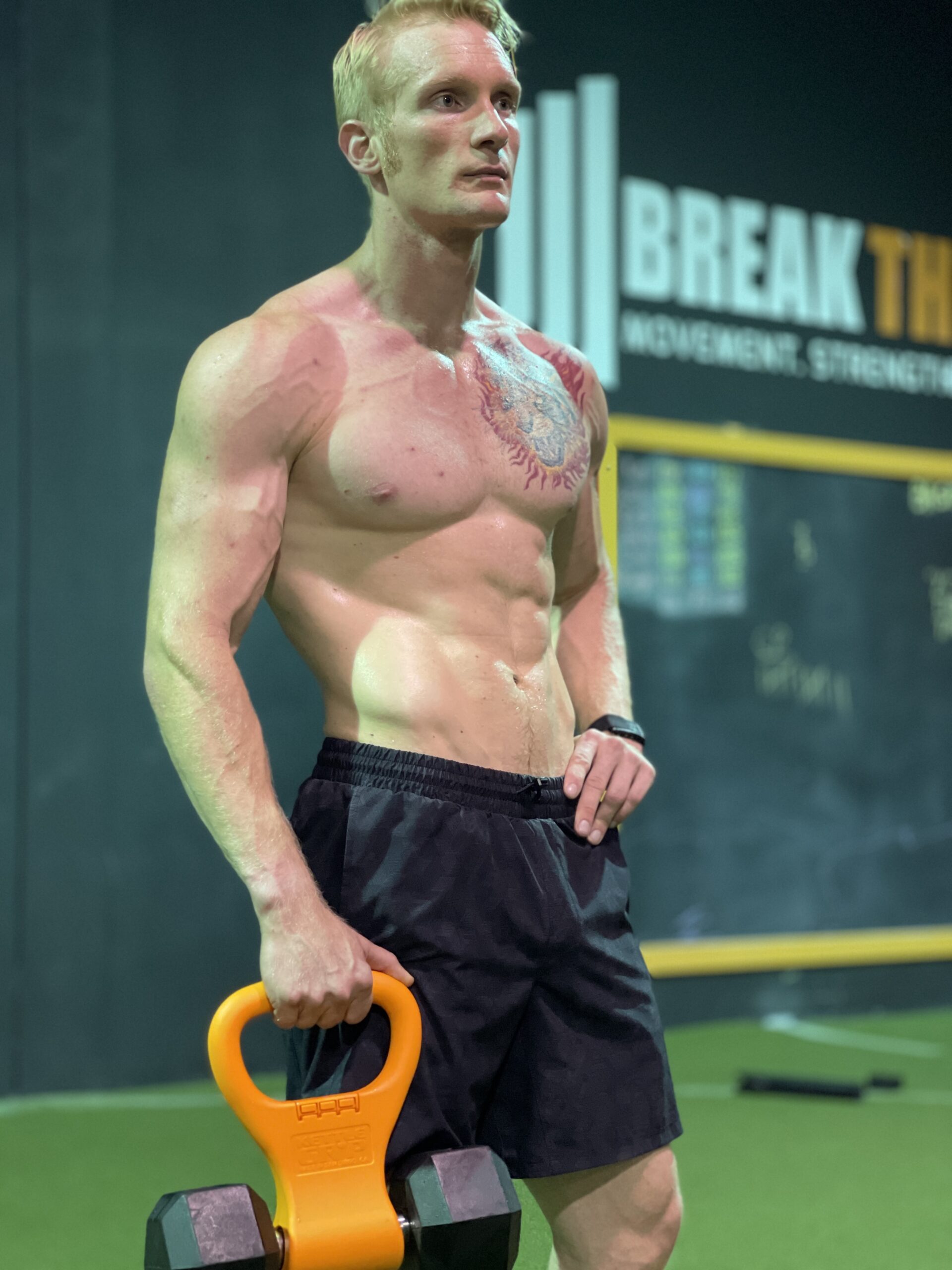 How to use the kettle gryp® 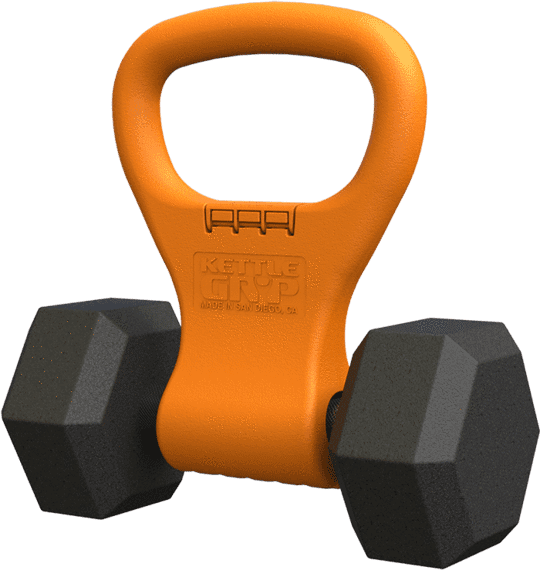 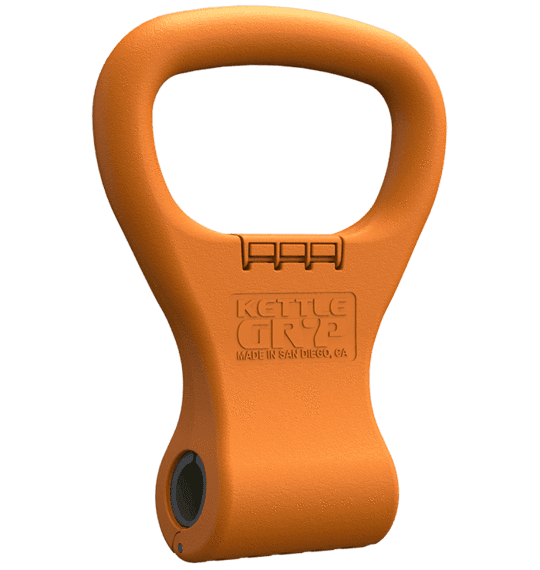 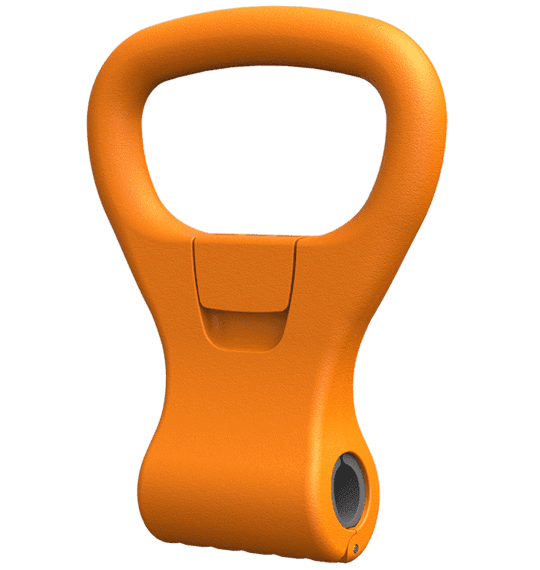 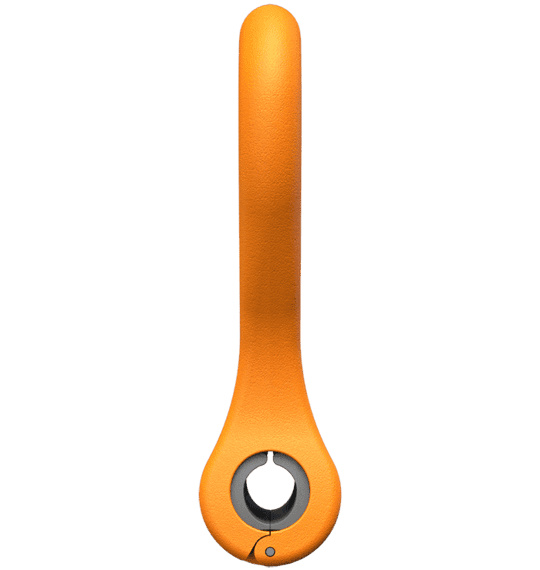 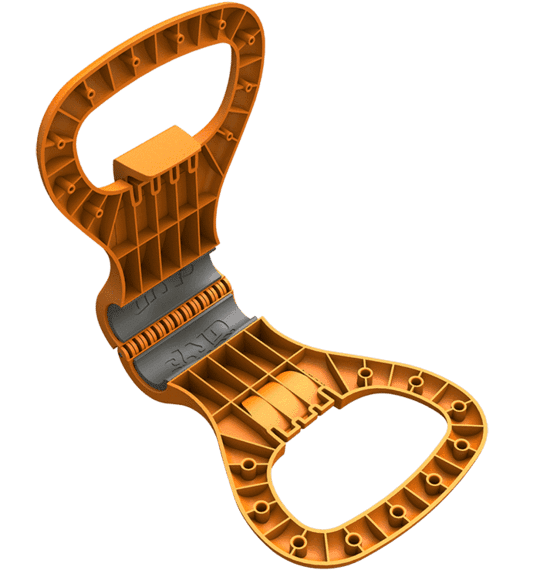 hear what others say about the gryp

“Awesome product! Great idea! Thanks so much! I love mine & travel with it super easily as it fits in my carry-on & now I can be even more innovative in my hotel gyms.
Product feels solid while in use. The dumb bell does not slip or move at all within the handle. Thanks so much – this is a great addition, & almost necessity, to fitness toys to own.”

“Upon receiving my Kettle Gryps I immediately put them to use on some large grip dumbbells and they fit perfectly. Whereas I had a full set of dumbbells before, I now also have a full set of kettlebells thanks to Kettle Gryp! I especially like the wide handles as with a lot of kettlebells, the handles are very tight for bigger hands. Kettle Gryps are a great way to expand your exercise selection without the additional cost of buying new equipment. They are the perfect addition to any gym! I also like that Kettle Gryps are Made in America!”